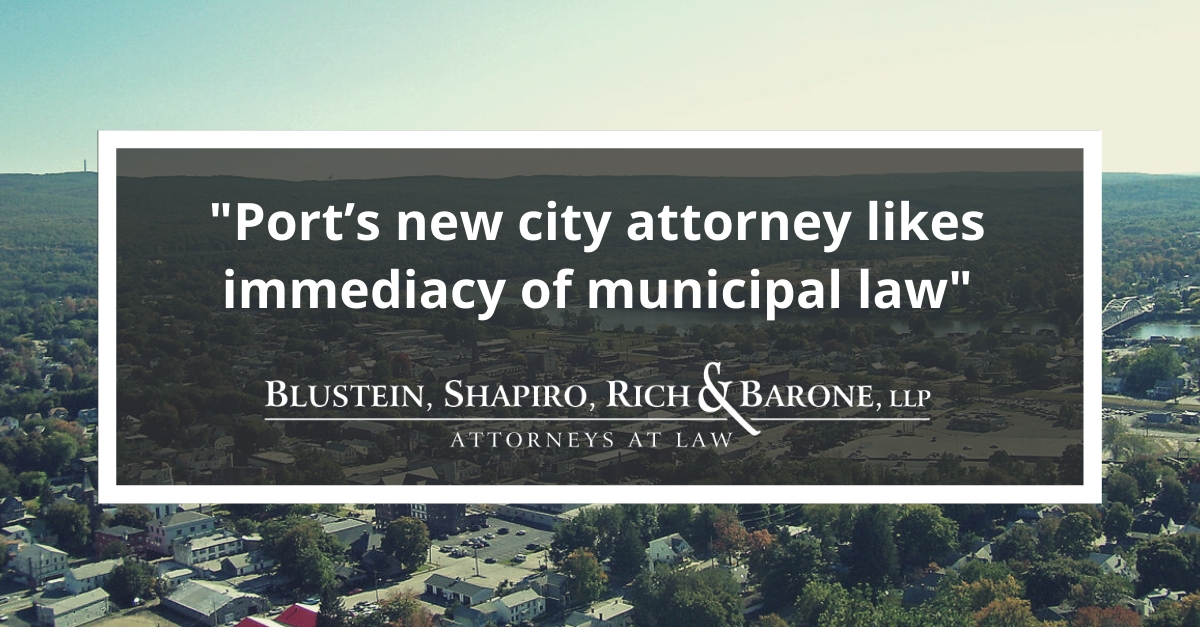 Jessica Cohen
For the Gazette as featured on recordonline.com

PORT JERVIS – Will Frank comes to the corporation counsel position in Port Jervis accustomed to the varied inner workings of municipal boards, having represented an assortment. Among them have been the towns of Wallkill, Montgomery and Minisink, and the villages of New Paltz, Washingtonville and Unionville.

“Every municipality has different challenges and a different board makeup,” he said.

As the Port Jervis mayor and council members went through their contentious decision-making process, sparring for months over which law firm to hire, Frank said, “We hung in there. I’ve been a municipal attorney for years. I enjoy diving into new municipalities. We pride ourselves on working hard for them and staying out of politics, which occur at every level. The local level is where services get delivered. The council makes sure people are served with proper procedures. We help them do that.”

His primary focus areas are banking and commercial as well as municipal law, which, he says, he gravitated toward rather than choosing in advance.

“I like municipal law because it’s hands on, involving many issues – labor, zoning, real estate, police and public safety,” he said.

He noted that because of the ongoing significance of those issues, the office of his firm, Blustein, Shapiro, Frank and Barone, LLP, in Goshen, did not close during the pandemic shut-downs. “We helped with emergency orders from the governor,” he said.

“We have conference calls and Zoom meetings to share information and discuss municipal challenges,” Frank said.

Among recent challenges were the mandated 50 percent municipal staff cuts. Determining who was “nonessential” was problematic, as local governments had to continue functioning.

Frank arrived in the Hudson Valley after attending SUNY Albany and St. John’s University Law School on Long Island, where he grew up, then practicing law in Manhattan.

“I wanted to be a pro baseball player, but after high school, I knew that wasn’t an option,” he said with a laugh.

So, he followed in the footsteps of his father, a trial attorney involved in the public sector and politics, who worked for the Rockefeller administration in the 1960s and chaired the Palm Beach County Health Commission in Florida and retired prior to his passing in 2016.

“Both my parents encouraged me to pursue law. They thought I’d succeed because I like to discuss issues from different sides,” Frank recalled. “I wanted to be in the courtroom and did courtroom work for a while. I like arguing motions and thinking on my feet. Some lawyers know what kind of law they want to do, whether immigration, environmental or otherwise. I didn’t know.”

However, he gravitated toward municipal, banking and real estate law – “what I enjoyed and succeeded in,” he said.

He had been practicing law in Manhattan when 9/11 and other family needs prompted him and his wife to look toward the Hudson Valley. They moved to Bloomingburg in 2004. In 2005, he took a job with Greenwald Law, P.C., and he spent 10 years there, becoming a partner, before shifting to the Blustein firm.

“I love it here, the open space, less traffic, friendly feel,” he said. “It’s a different feel from Westchester and Long Island. Working in Manhattan for many years, I was always working with different attorneys. Here it’s always the same group of attorneys. You do important work with people and extend favors. You never know when you’ll need a favor.”

He said he prided himself on being available to Common Council members beyond the nine-to-five work day when needed. Recently he toured the city with Mayor Kelly Decker to become familiar with city issues.