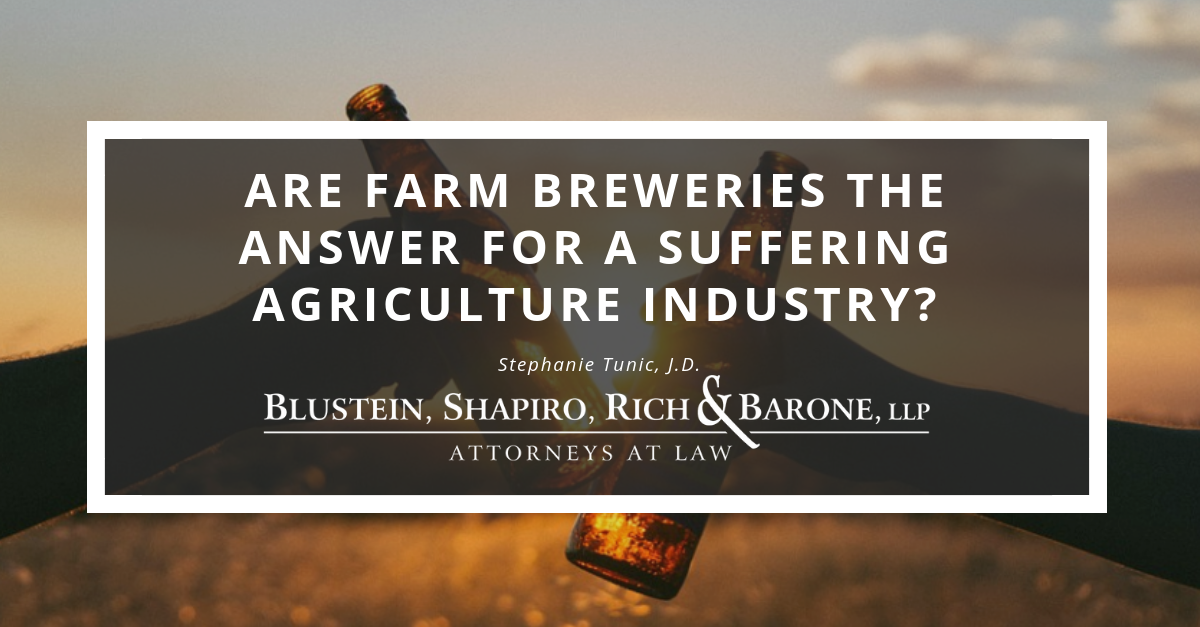 In the Hudson Valley, we have a longstanding tradition of farm wineries. However, today with both national and local family brands of craft beers, spirits, and ciders coming into the mix, we have numerous breweries, distilleries, and cideries all right here in Orange County. In fact, these are the new weekend hot spots.

But what is a farm brewery, distillery, or cidery? In 2013, New York passed the New York Farm Brewery Law, which mirrored the highly successful 1976 Farm Winery Act. In short, the law allowed the State Liquor Authority to issue a new class of “farm” alcohol manufacturer licenses for craft breweries. The license would allow craft breweries to also conduct on-site tastings. Today, the New York Alcoholic Beverage Control Law has expanded “farm” licenses to cover each type of alcohol (and not just wine, as it had traditionally). Essentially, being a farm brewery, winery, distillery, or cidery means that, as a business, you:

On the surface, laws encouraging these types of businesses are beneficial because “locally sourced” is better for the environment and seems to be in vogue. However, even more exciting are the deep economic impacts of the law, since on average New Yorkers drink more beer than wine or hard liquor. But is this the answer to all our agriculture woes in New York? More importantly, why should traditional farmers pay any attention to this new wave of crop demands?

Interestingly, in the late 1800s, New York produced as much as 90 percent of the hops used to make beer around the country. Prohibition eliminated this production, and until recently, New York has never gotten back to its peak production rates. Furthermore, it is no secret that the farming industry, in general, has been in decline within the past decade. As any farmer will tell you, diversifying crops is often the key to survival. This boom in farm breweries, cideries, and distilleries is today’s opportunity for farmers to achieve that goal of diversifying. The statutory requirement of having New York State-grown ingredients has opened up an enormous need for crop-specific agriculture, and has generated opportunities for New York farmers to profit.

Specifically, Section 3 of the Alcoholic Beverage Control Law provides that to become New York State-licensed as a:

By requiring New York-grown ingredients, this legislation has created a secure pathway to market for farmers. But what if you want to literally enjoy the fruits of your labor? Farmers can always choose to supplement their farm income by starting their own on-site brewery, cidery, distillery, or winery. Moreover, Orange County farmers are constantly and consistently being contacted by developers looking for farmland to build solar farms, residential subdivisions, and commercial warehouses. But even for those farmers who don’t themselves plan to become a part of the growing alcohol manufacturing business, they might consider leasing their land to a local farm brewery, winery, cidery and/or distillery.

Farm breweries, distilleries, and cideries, along with the well-known wineries, offer promising economic opportunities for New York farmers. Be warned that while the economic advantages are enticing, having knowledgeable legal counsel with experience in land use and, in particular, right-to-farm type laws is essential for a smooth transition to becoming either a grower or manufacturer. Look for attorneys with experience representing landowners in front of local planning and zoning boards. That way you can focus more on the growing and brewing, and less time navigating the legal process.